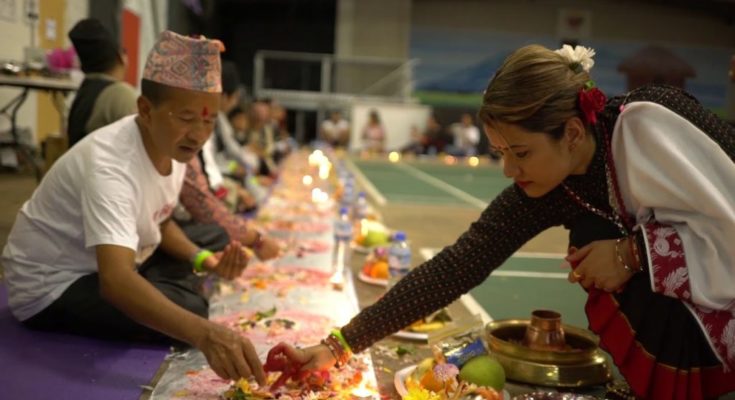 Mha Puja is an annual Newari ritual in Nepal for celebrating one’s nature, purifying and empowering one’s soul. The day is also held as the Sambat day and the new year of Newar people. To understand oneself and to respect the position of oneself in the world, Mha puja is important. The Mandala is symbolized as the globe, fruit, and sagan of the globe. The celebration and feasting of Itaa lights by family members around the Mandala also helps to improve family relations. If the daughter is married then she can’t perform puja. The regular Mha Puja is usually performed in the dining area on the floor.

When is Mha Puja celebrated?

On the fourth day of Tihar, the culturally wealthy Newar group celebrates the Mha Puja festival. This festival is based on Nepal Sambad Calendar. The Newar celebrates the Tihar festival during Govardhan puja or the one day before vai Tika while most of the nation enjoy the festival Tihar.

Mha Puja festivals spread a beautiful message in order to respect oneself. Families to families differ their way to celebrate. The Mha Puja needs to finish the following seven components.

The Mandala is Mha Puja’s most major part. The Mha Puja is usually performed on the floor near the dining hall.  At first, the floor is purified and sprinkled with saintly water from the holy river or lakes. People think the water purifies the area. For each family member in the front row, the Mandalas are drawn. Thus, Mandala’s total number depends on the number of family members. Three additional mandalas are also present. The little Mandala is at the top of the chamber. The two others, Yam raj (the deity of death) and Jamaraj (the god of life). Mandalas are drawn around the primary mandala for the other family products such as a broom, water pitch, winnowing tray, etc. 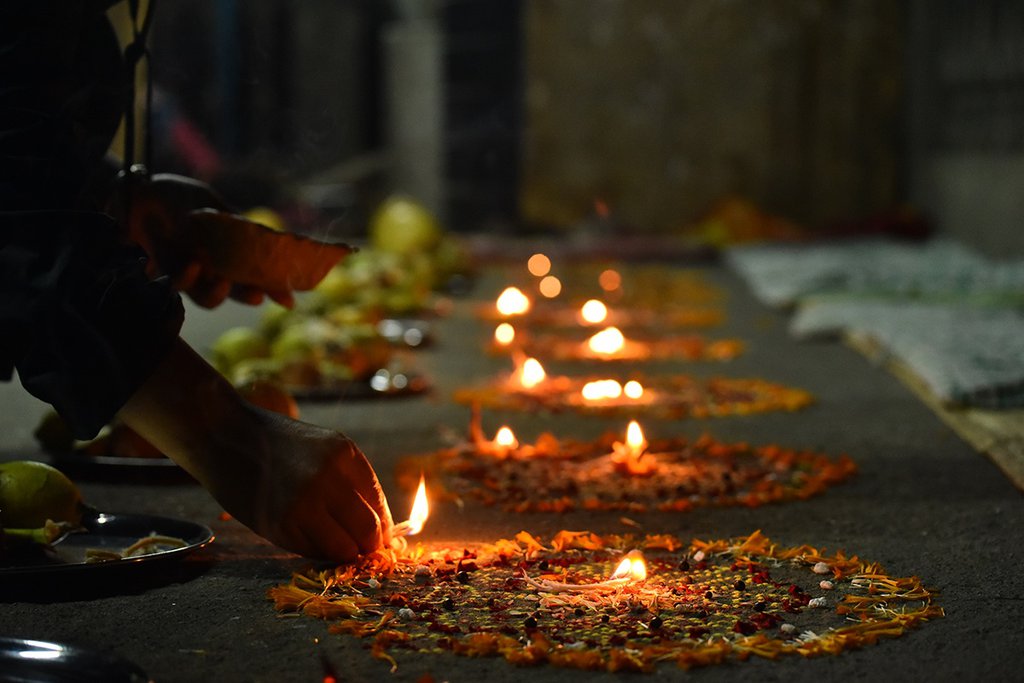 Itaa simply means cotton lights woven by hand. The itaa is preparing by twisting and pulling up the cotton to a certain length. They usually have a length of 2.5 meters. The Ittas are first soaked in oil and given to worship. By singing the Sanskrit mantras, the receiver takes the Itaa. The primary family burned the Itaa and placed it into every Mandala’s rice puddles. The Newar thinks the Itaa is a sign of being bright and scented before each other. For the whole time puja is done, they keep light burned.

Sagun, after burning Itaa’s hand-woven, is offerings produced to a person during the Mha Puja. Dahi (Yogurt), is the first Sagan receiving the mix of rice, vermillion powder and yogurt from the family members. The mix is known as Akshata collectively. Yogurt is the first Sagun and is symbolized by it. It is thought to bless an individual in moments of darkness to enlighten himself. The Khen Sagan is another Sagan composed of wood, fried fish, boiled and fried ox, meat buff, fried ginger, bean cake, and local wine Aaila. The WO is the land, fried fish is the water life and egg is the air life. Meat implies intensity and Aaila is part of life. The wo is the earth. The Newars also consider that before Itaa gets off the light the Sagun should be eaten.

The people sitting by the Mandala will receive different types of fruits and nuts. The fruits and nuts represent a fruitful and creative life. Tashi, walnut, sugarcane, local chest, and many home-made sweets in various forms like a star, moon, etc. are part of fruits and nuts. The Newars believe that Puja observes the god of death, Yamaraj. They also think that everyone who observes Puja is resistant to death by the spiritual and physical power of the Puja. There is also the traditional belief that during the ceremony, the walnut roots safeguard the person from the Yamaraj till the root rot is nearly impossible.

Mha Puja is a significant component of the flowers. Every member of the Puja has the flowers magnificently arranged into a garland. The Newar calls them “gweswaan” and carries them around the neck. The worshipers placed a long and prosperous life around the garland.

The Jajanka is a cotton white thread. The thread is ultimately bound to the red cloth and circled so that there is no end. The round thread is about 2 feet in diameter. The forefathers wear the Jajanka around their necks as well. The Jajanka is a sign of patience and promotes the person to focus and trust, rather than cross the limits of oneself. Jajanka is also a description of the start and end combination. The Jajanka is about creating, maintaining and living.

Paddy showers, blooms, fruits, vermillion powder, aakhen (hand-milled rice) and taye in the kule (wooden or bronze container) from the head of the worshiper are provided by Nakin or Purohit. The entire ritual end, after the Purohit powers down the mix and, drags the broom from the Mandala to the Mandala of the house-god.

Nepal Sambat is a Newar calendar, also known as a lunar calendar. It comprises 354 days a year, and each third year is added one month. Nepal’s Sambat is a worldwide unique calendar because it is only a calendar that is named after a county. Shankhadur Sakhwal introduced this calendar by clearing all debts due to the state by the subjects of Nepal on their own. The Newar community’s people celebrate the Nepal Sambat as New year’ day. Nepal Sambat is Nepal’s ethnic calendar. The people of the Newar group observe the evening Mha Puja ritual. Pha Puja is the self-worship. It is only observed in the Newar community. Shankhadhara Sakhwa began the Nepal Sambat or calendar year, believing that in 880 AD during Licchavi King Raghavdev’s rule the people of Nepal were relieved of the debt. 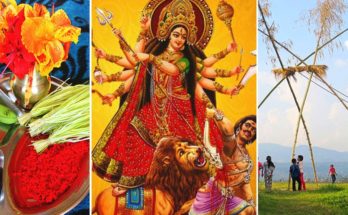 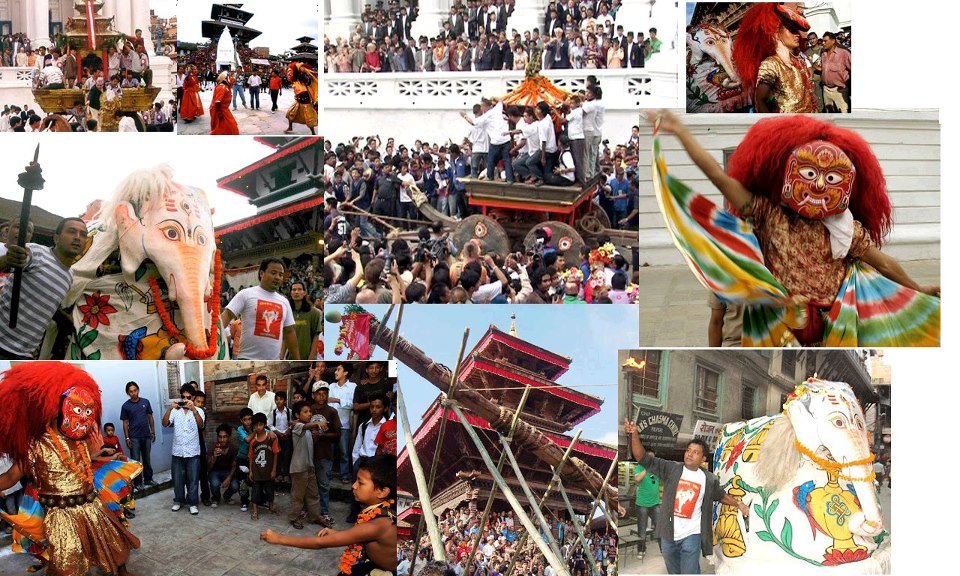